During November, Aviva UK asked its employees to “Nominate One” in Corporate Responsibility categories – Fundraising, Volunteering, Street to School, Green and Outstanding – allowing people to nominate their colleagues for the charity and goodwill work that they do inside and outside the workplace. Over 150 nominations were made, with over 1000 votes being cast. The nominations were shortlisted to three per category, and the results were announced in December. 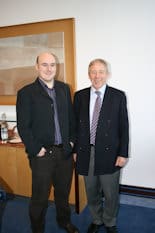 Richard Burke won with the most votes in the Volunteering category. He’ll be donating the £750 award money to ‘Respect Yourself’ and he had this to say to the employees who voted:

“Thanks for the great news, this is amazing! It’s truly great to be able to share what we’ve achieved outside of work life – not just myself, but everyone else who was shortlisted – and I hope awareness has been raised for all the work done and for the organisations and people we support.

“It’s great to have the support from everyone who voted – we can make a real difference with the award! To everyone who voted: you’ve given real people the opportunity to make more positive decisions in their life. You’ve saved lives, changed lives, and helped empower young people to take control of their lives. Thank you.”

Richard was invited to have lunch with Aviva UK CEO Trevor Matthews at the Aviva offices in London in February so he could be personally congratulated.

‘Norfolk Says No’ to Domestic Abuse

The Knitted Teenager Competition has started!