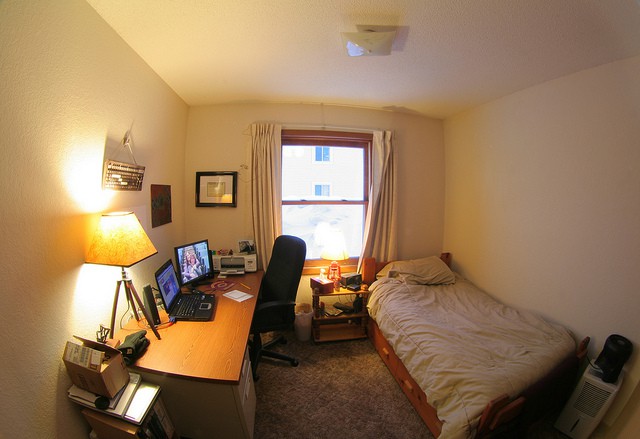 My Bedroom/Office by Jordan Green

June, 28th of 2013. That is the date when I last wrote for Respect Yourself, I talked about agoraphobia, not as an expert but as a mere sufferer, I was just a 17 years old boy who got the chance of sharing some words about what I had to deal with everyday. And here I am now, a 20 years old man who’s turning 21 this August.

If I have to be honest nothing has changed a lot from the first time I wrote. Time though, oh time, time does not forgive anyone, it devours the rich and the poor, the short and the tall, the pretty and the ugly ones. However, let’s not treat time as an enemy but as a teacher. I’ve learnt a lot since the last time I shared a word with you and I’m grateful for that, there’s not one condition in this world that enables us from learning new things and see life with different eyes, different perspectives that enrich our souls. I’ve improved my English and though it’s quite far from perfect it’s been one of the things that have encouraged me to write again, some things are too complex that you need to manage a language enough to express your ideas clearly and I think that now I’m more prepared to face that challenge, we’ll see how it works out. And of course I’ve learnt a lot more about my condition which is basically the issue that brought me here. If you’ve read my old entry you may remember that I finished it telling you that in my next one I would talk about my case and though it’s been quite some time since then I won’t break my promise.

I’m Raúl Pérez, a guy who happened to be born in Vigo, a coastal city in the northwest of Spain, in a region called Galicia. I had always been an ordinary boy like everyone else who enjoyed the typical things boys did. I’m still being one, I haven’t mutated and I still have no extra parts in my body, just two arms, two legs, two eyes, etc… the usual for a healthy human being, you know, but sometimes my brain thinks that I’m not ordinary anymore, not since that agoraphobia came to me and turned me into an allergic person to open spaces, however I know I’m a pretty normal person with some eccentrical features (in the end being completely normal would be very boring).

I think I’m rambling a bit so let’s go back to my childhood. I loved watching movies, playing with friends, videogames, reading (this latter sadly is a bit strange to some kids nowadays), etc… I was and I’m very obsessed with Harry Potter, in fact that was the spark that made me fall in love with books, it also made me an anglophile and helped me to study the English language with passion, I will always be in debt with Ms. Joanne Rowling for that. I was also a very fearful child, little things which not my parents nor I did take much attention, I was afraid of dogs, lifts, water, fireworks, was not very comfortable in crowded places or noisy spaces…. (as I’m writing I’m realising that maybe they weren’t just “little things”, but let’s say that we didn’t know too much about psychology in my family to care about those things too much). I was also a good student, didn’t have to do too much to brag about my marks.

The point of inflection was in high-school. One evening, in a biology class I suddenly felt dizzy, as if I was about to faint, my pulse began to raise, I was short of breath, it came out of the blue, the class was almost over but I left the building some minutes before as I had told my teacher that I wasn’t feeling good, I was very afraid, I thought I was having a heart attack or that I would collapse (I’ve always been a very hypochondriac person) but in the end I reached my home and I calmed down, I guess I realised I wasn’t going to die that day.

But the seed had been already planted, a seed of fear that wouldn’t stop growing. I tried to stop my fears from growing and went to a therapist who gave me some medication and was able to manage my anxiety for some time, in fact, when I was 15, thanks to a scholarship I fulfilled a dream and went to study to England, just for 21 one days but they were the happiest days I can recall, at last I had set a foot in the land of my friend Harry Potter!

Sadly those days came to an end and I relapsed. Everyday I would start feeling bad in class , would go out and try to get better, at first it worked and I managed to calm down but as time went by that old seed of fear became a tree whose shadow began to chase me and little by little I started to escape from everything, first from my classes, then from going shopping, then from going out with my friends and finally I ended up prisoner of my own fears, just stepping out of my flat’s door would make me freak out. Just when I thought that things couldn’t get worse the shadow of my fears almost crush me making me feel bad even in my own bed. Nevertheless I learnt that fear can paralyse you but it can’t kill you. It’s when you realise that catastrophic thoughts aren’t going to end with your life that you start thinking a bit more logically and it’s then when you say to yourself “this has to change”.

Last November I was so desperate that I acceded to go to a session of a kind of alternative medicine that my also desperate mother had heard about, I’m a very scientifical guy and I had never believed in any treatment that wasn’t prescribed by a doctor but I didn’t have anything to lose so I finally decided to go. It was called Reiki, an old Japanese technique that is supposed to improve your physical and mental health by balancing your energy, when I heard that I laughed to my insides but for my surprise, in the first session (she came to my house) I felt weird things, heat, cold, something similar to electricity, my arms would feel numb… To be honest I didn’t have a clue about what was going on in my body, she just would place her hands over me without even touching my skin and I would experience those strange reactions. I still don’t know if it acted as a placebo effect but the truth is that little by little I started to feel better and more positive, she stopped coming to my house and I went to the place where she usually does her job, I began to take little walks and I even went to dine with some friends at a restaurant, something I had almost forgotten.

Sadly, two weeks ago I started to feel worse again, but I’ve promised myself that this is not going to last long, I’ll rest a bit, gain some strength and then I’ll hit the streets again, because time has taught me to never despair, time has taught me that time cures everything one way or another, you just have to fight and you’ll realise that nothing is so bad as it seemed to you and that the only thing we must fear is fear itself.

Please, though I’ve said that that alternative treatment has helped me never substitute it for medical treatment, the first step is going to a specialist, if you want to search help through other means you can, but never before going to a proper doctor, and of course don’t let people cheat you, don’t trust in magical solutions.

About the author: Raúl Pérez is a 20-year-old Respect Yourself supporter from Spain who suffers with agoraphobia.

Photo: My Bedroom/Office by Jordan Green under Creative Commons license

Do you want to be a bully or a hero?

Self-Esteem: Learning to Love Ourselves

Don’t Let Shyness Hold You Back