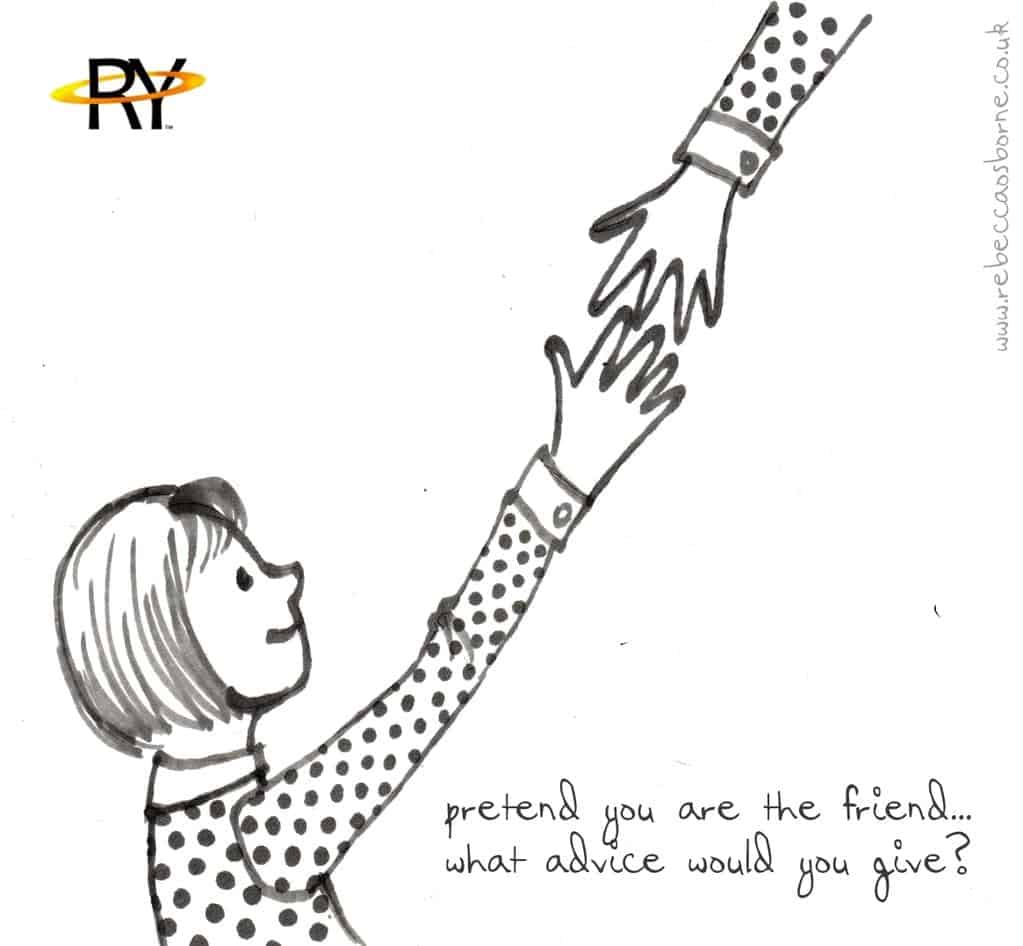 Helping a friend by Rebecca Osborne

My name is Joe. I am a 32 year old man. I decided to do a written piece for Respect Yourself because I was on their website checking out what they do and I was hooked by their aim…”helping young people develop skills, capacities and capabilities to participate in society”. Why does that mean so much to me?

Between the ages of 6 and 30 years old I always felt like I was on the outside of life looking in at everybody else seemingly having a great time. I felt like the odd one out all the time. Constantly felt inadequate. Lived in a perennial fear that someone might find out how I really felt inside despite my desperate attempts to conceal my insecurities. As it turned out I was the one who revealed my insecurities to the world, not anybody else. Oddly enough I see that as a blessing in disguise these days.

From as far back as I can remember, which is 6 years old, I have felt unmanageable degrees of fear. I grew up wearing nappies up to the age of 16 because I have Spina Bifida and I was bullied for that. I really did not cope with that very well. I became incredibly insular. I felt it was the most effective way of protecting myself from any further threatening behaviour from anybody else.

My home life was dysfunctional to say the least. Both of my parents were alcoholics and drug addicts and domestic violence at home was not uncommon. This along with the issues of bullying at school around my disability which I had internalised had turned me into a very deeply troubled young man who had no coping strategies at my disposal which could offer any hope of a solution to the problems or the underlying causes of them. And then things changed…

Having grown up seeing my parents abuse alcohol and drugs, I took cannabis when first offered it with a fair amount of impunity at the age of 13. I was instantly attracted to the ease with which the emotional baggage which had been weighing me down for so long seemed to be taken away from me in a moment and it seemed I had gained the approval of a couple of friends to boot. It seemed like the perfect scenario. On the surface I appeared to change too. I began acting very confident, over-confident, or even arrogant. I have found a thirst for this new thrill-seeking side of life which was not easily satisfied.

The pursuit of this satisfaction through mind-altering substances including alcohol and several class A drugs continued for several years and then in 2002, at age 16 my father committed suicide. My mum took the death very badly and ended up being sectioned under the mental health act and as I had no legal guardian available to care for me, I was moved into a supported accommodation for homeless young people. My drug-taking and alcohol consumption became even more frequent.

During this time I had “figured out” that I could also fix my feelings using sex the same way I used drugs and so I began a string of causal relationships once I got out of nappies until one of them became serious. In 2012 I ended up in a relationship with a girl who became pregnant within 3 months of us meeting. She was a great girl but because of my unresolved emotional and mental health issues it was destined to fail from day 1 and I began using drugs again and being unfaithful to her despite her doing her best to keep our family together, I think mostly for our son’s sake and she eventually left me in 2016.

A couple of weeks after my son and his mum had left the family home, my mum died of liver failure because of her alcoholism and I was feeling suicidal. I was at a crossroads where I was either going to drink myself to death as I previously considered suicide by slitting my wrists, but did not have the courage to do it, or I was going to ask for help. I ended up asking for help from my GP because I could not get rid of the thought of the damage I would be doing to my son if I did kill myself, not least because I had felt the consequences of my own father killing himself first-hand, so I knew what I would be putting him through if I did it.

In November 2016 I went through rehab and I am extremely proud to say I have been clean of all drugs and alcohol since 22nd November 2016. In that time my life has become unrecognisable to the one I had before. I am long past harming my family and friends. I feel I have got confidence, self-respect, dignity, peace of mind, a purpose in my life and these wonderful things because one day in 2016 I finally decided to ask for help.

The reason for the title is because life throws challenges at everyone! It is what you do about it that counts. Don’t think, like I did for the first 30 years of my life, that asking for help means you’ve failed. It doesn’t. It’s a sign of strength, not of weakness. And choose your coping mechanisms wisely. I thought I had found the solution to my emotional problems in alcohol and drugs and it nearly killed me and caused enormous grief for those closest to me. I have found that talking to someone about your problems is the most effective and sustainable way of dealing it, as hard as that is. I still feel resistance to talking honestly to people sometimes because my ego tells me I shouldn’t struggle now, but it always works and who knows you might even help somebody else out in the process.

About the author: Joe Postings is an undergraduate Psychology student hoping to go in to Clinical Psychology as a practitioner and a researcher on his favourite subject: addictions. He has been trying to learn to play the guitar for a good while and has only recently figured out that, much like his recovery from drug and alcohol addiction, it is a journey, not a destination. Joe loves volunteering for organisations and needs other people to tell him when he is spreading himself too thinly but on the whole people often comment on his tendency to be wearing a smile. He loves talking with other people about all things mental health, so if you want contact him please do so on Twitter @Joep15041986

illustration created for Respect Yourself by Rebecca Osborne

How well do you really understand anxiety?

Tips To Make Being Online a Happy – Not an Unhappy – Experience!

Indulgence vs Isolation: Your Mental Health this Easter